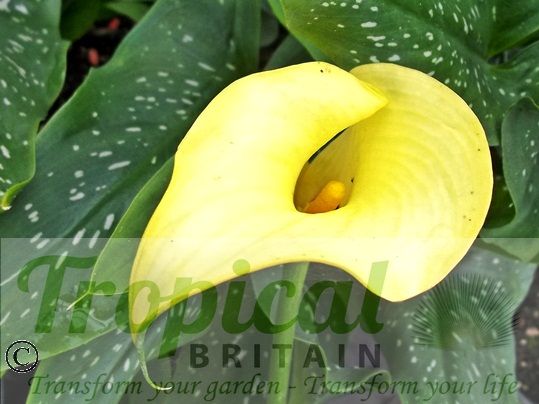 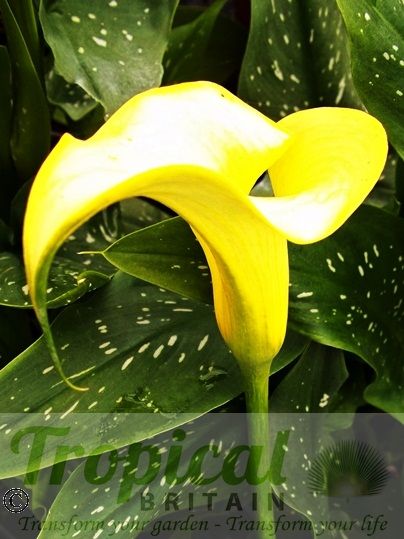 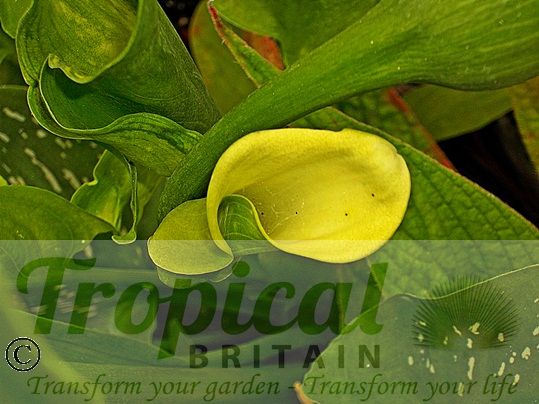 An exceptionally beautiful species, Zantedeschia elliottiana has handsome foliage spotted with translucent white markings remarkably similar to Zantedeschia albomaculata but with creamy-yellow spathes and a yellow spadix. It requires a warm sunny aspect in a humus-rich but sandy well-drained soil and while it appreciates watering during the growing season - like its near-relative, Zantedeschia albamaculata - it should be dried out once it has finished flowering in July to prepare it for its winter dormancy. It cannot be considered a hardy species in any sense of the word and is best lifted in the early autumn so it can fully dry out for the winter. Overwatering of this species - like Zantedeschia albomaculata - will cause it to rot and when planting the tubers they are best sited on a generous bed of sharp sand and grit.

There is a certain amount of confusion as to the exact origin of this species. It was apparently first raised from a batch of South African seeds in 1886 by Mr. G M. Knight, gardener to Captain George Elliott, a County Magistrate, who lived at the 100 acre estate Farnborough Park in Hampshire. In an article on Richardias - the then name for Zantedeschia - in the Gardener's Chronicle, 1892, Series 3, Vol 12, P.124 (published Jul 30 1892), William Watson - the original describer of the species - writes, "We now come to the new ones. The first of these has been called Calla Elliottiana, in compliment to Captain Elliott, of Farnboro Park, Hampshire, who has exhibited it several times in London within the last three years. I have received the following information concerning the plant from Mr. Knight, gr to Capt. Elliot, in reply to some enquiries I made with regard to this plant. He wrote, "Six years ago this spring I had six seeds given to me by the late Mrs. Elliott, who informed me that they were 'red Arums.' I sowed them, and out of the six only one grew. The first year it developed two unspotted leaves, the next year it produced a spotted leaf, and the third year it pushed up two leaves and a yellow spathe. I did not show it at the Drill Hall till the following spring (1890). From the first flower we obtained eighty-six seeds, from which we raised fifteen young plants, and the plants shown this year in flower were from this batch of seedlings. Last year the plants I showed were the parents (one an offset). The seedlings did not flower till this year, and as the plant came true from seed I did not trouble to keep seedlings and offsets separate, but until the former flowered I did. We took no care of the plant, and it was knocking about amongst odd plants for two seasons as I thought after I saw the spotted foliage that it was only albo-maculata, although wider in leaf, and not so long. All the plants sold in London on June 17 last were raised by me from the one original plant first exhibited at the Drill Hall in 1890. The second year the plant produced sixty-eight seeds."

Curiously, Watson then goes on to write: "Whether this plant will prove to be a good species, or only a variety of R. albo-maculata, it is certainly distinct enough for garden purposes to bear a separate name. Its recent distribution by auction sale among nurserymen and others is certain to result in its soon becoming available for collections generally."

We find out a little more about this auction sale of June 17 in an article Watson must have written about the same time although it was published two weeks earlier on July 13 1892 in the American journal, 'Garden and Forest: A Journal of Horticulture, Landscape Art, and Forestry'. Established by Charles Sprague Sargent (1841-1927), the founding director of the Arnold Arboretum of Harvard University, Garden and Forest was a pioneering publication that lasted from 1888 to 1897 and was the first American journal devoted to horticulture, botany, landscape design and preservation, national and urban park development, scientific forestry, and the conservation of forest resources. In it Watson writes: "CALLA ELLIOTTIANA -The whole of the plants of this new yellow-flowered Calla, or, as it should properly be called, Richardia, was sold by auction a week ago. It will be remembered that the plant was first brought into notice at one of the fortnightly meetings of the Royal Horticultural Society about three years ago, when it was awarded a firstclass certificate. Since then Captain Elliott had increased the stock, by means of seeds and offsets, with such success that he was able to put up nearly two hundred and fifty plants for sale. These realized from seventeen guineas to about twenty-five shillings each, according to size, the total sum obtained for the whole being four hundred and sixteen pounds. The London nurserymen were the principal buyers. No doubt, in a few years this beautiful plant will be as plentiful in gardens as the white-flowered one is now. Evidently it is as easy to manage as the rest of the Richardias. I omitted to state in my previous letter that Captain Elliott's Calla was awarded the first prize for the best new plant in bloom at the International Horticultural Exhibition at Earl's Court."

Gosh. Seventeen Guineas. That's alot of money in 1892. Although apparently at the same auction, ninety guineas was not enough to secure a specimen of Zantedeschia pentlandii and it went unsold. Ninety guineas! In 1892! I have no way of working that out exactly but in today's money that is several thousand pounds.

Watson continues in 'Garden and Forest', by describing Zantedeschia pentlandii (he had also gone on to do this in the Gardening Chronicle article) but what is interesting is the doubt he throws on the identity of Z. elliottiania. In much the same way that he had cast doubt on its pedigree in that article by suggesting it was a variety of Z. albomaculata, Watson here casts doubt on it by suggesting the possibility of it being a variant of Z. pentlandii.

He continues: CALLA PENTLANDII - A plant bearing this name was exhibited at a meeting of the Royal Horticultural Society, held on Tuesday last, and from its being yellow flowered it attracted much attention. While it differs from C. Elliottiana in having a slightly larger spathe, and in being tinged with purple at the base inside the spathe, as well as in having unmottled leaves, it still bears a good general resemblance to that plant, and is probably another form of the same species, whatever that may be. The species of Richardia, at present known in gardens, are R. iethiopica (Africana), R. albo-maculata, R. hastata and R. melanoleuca, and no doubt these two new yellow-flowered kinds are varieties of one or the other of these.

So... a great deal of uncertainty, both on William Watson's part and on the part of Mr Knight the gardener... This was a species that was not collected and described in the wild but was raised in cultivation and described from a single surviving seedling...

Now in the light of all this you would think that modern day taxonomists would be very careful about making too many claims about the natural origins of Zantedeschia elliottiana, yet the World Checklist of Selected Plant Families states that this species is found growing in Mpumalanga.

Interestingly, Watson, in his Gardening Chronicle article, after he had gone on to describe Zantedeschia pentlandii, ends on this colourful note..."There are other "yellow Callas" in English collections beside the two we have flowered. I know of six which were brought from Africa by a traveller, who said he had obtained them as a special favour from a Basuto chief. I have also been told that some short time ago, a gentleman came from near Natal to offer thousands of them. Of course, these swans may be geese; but, with the plants of R. Elliotiana and R. Pentlandii to work from, it should not be difficult to make of them as plentiful in a few years as the White Trumpet Arum is in England now."

Indeed. At seventeen guineas in 1892 money I would be working around the clock to propagate them. Yet still no verified sighting of them in Mpumalanga ? Curious.

There is a variant on Zantedeschia jucunda with a wine-red wash to the yellow spathe. One wonders whether this could be the 'Red Arums' Mrs. Elliott was referring to but regretably, of the six seeds sown, the only surviving seedling did not have that particular characteristic.

DNA analysis should prove it, one way or the other...