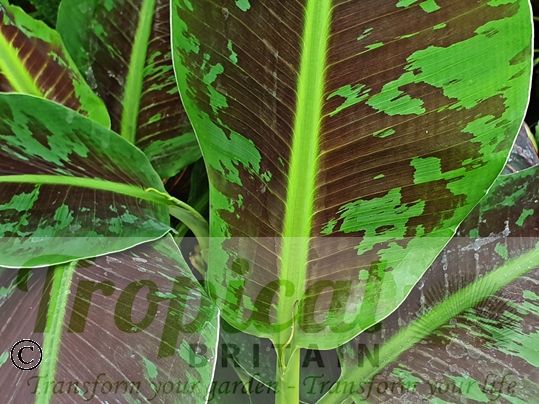 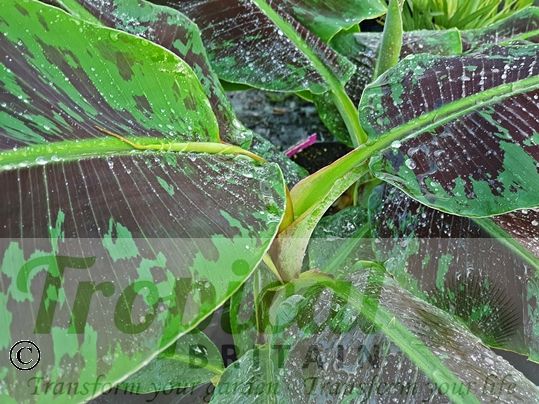 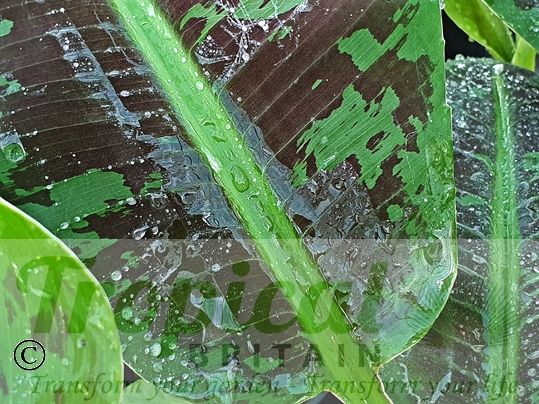 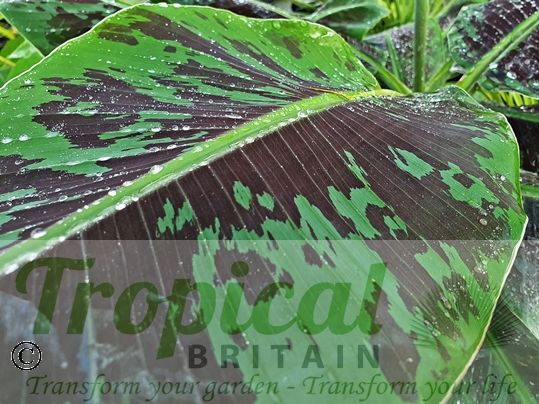 Musa (AAA Group) 'Dwarf Cavendish is a stout, stocky, suckering banana cultivar with edible seedless fruit and ornamental foliage that is heavily marked with reddish-purple variegations when young but turns green as it matures. In a heated greenhouse in the UK it will oblige with large hands of fruit if watered and fed liberally and in the tropics it is one of the most important commercial banana cultivars. The small stature and compact size has many advantages for its commercial application.

If grown outdoors in the UK during the summer months it is best in a warm wind-free aspect in sun or partial shade and watered and fed liberally. Bring in under heated glass or into a conservatory in October.

Usually listed as Musa acuminata 'Dwarf Cavendish' in the horticultural trade, this is accurate as it is a triploid cultivar of the wild-occuring Musa acuminata, a diploid seeded species. However, Simmonds and Shepherd, in their pioneering work on the taxonomy of edible bananas back in 1955 argued that classic Linnean binomials were largely irrelevant for cultivated bananas and plantains as there were many different clones that were so far removed from the wild species as to make binomials meaningless. They proposed an alternate system for nomenclature based on the genetic constitution of the plants using A to signify Musa acuminata and B to signify Musa balbisiana and the number of chromosome sets in its genome. Diploid cultivars were either an AA or AB genome group and triploid cultivars fell into three genome groups: AAA, AAB, ABB. The AAA genome group is the most widely grown group of edible bananas and as triploid cultivars are essentially sterile, they reproduce vegetatively through suckers. The many different clonal variations of 'Dwarf Cavendish' have arisen naturally from mutation and their number has rapidly proliferated over recent years as imports from commercial micropropagation laboratories - particularly in India - have come onto the market.

The emergence of the 'Dwarf Cavendish' as an important global food crop dates back to 1826 when Charles Edward Telfair, honorary curator of the Mauritius Botanical Garden, obtained plants either from Vietnam or - some reports say - China. In 1829 Telfair sent to England two plants to a friend of his, Robert Barclay, a wealthy Southwark brewer who had bought a thousand acre lot of the Bury Hill Estate to the west of Dorking in Surrey when it was sold by Viscount Grimstone in 1814. Barclay was an enthusiastic gardener and botanist and created pleasure gardens with large ornamental lakes but in 1830 - just a year after he acquired the banana plants - he died. After Barclay’s untimely death his vast collection of exotic plants, including the two bananas was sold to nurserymen, Messrs. C. and J. Young whose 20 acre nursery in East Street, Epsom was one of the horticultural epicentres of the day under the expertise of their chief propagator Mr Penny. One of these two banana plants was subsequently exported to Europe. The other was sold for £10 to.Joseph Paxton, who was employed by the 6th Duke of Devonshire, William Spencer Cavendish, as Head Gardener on the Chatsworth Estate. Paxton grew it successfully at Chatsworth using well-rotted dung to maintain a constantly high temperature in a hot-pit technique similar to that used at the time for growing pineapples in cool climates. In November 1835 the plant flowered and by May of 1836 was loaded with over a hundred ripening fruit. Not long after, the banana - now called the 'Cavendish Banana' - continued its global wanderings when The Duke of Devonshire supplied two cases of banana suckers to the missionary John Williams for his return voyage to Polynesia in 1837 on the ship Camden under the command of Captain Robert Clark Morgan. Apparently only one of the Musa survived the journey to Samoa and that single specimen became the forebear of most of the bananas that flourish in Samoa and other South Sea islands today. The Samoan cultivar is known as Fa'i Palagi, in Fiji it is known as Jainaleka (Jaina is short and leka is sweet) and in Papua New Guinea it is called Kaina Vavina. In 1853, Missionary Charles Hardie also took Chatsworh banana suckers to the Pacific and although they rotted en route, he planted the stumps and they grew and were later distributed to mission stations on several more Pacific islands. Meanwhile, in 1846 in Tenerife, Alfred Diston, working as Inspector of the Jardín de Aclimatación de La Orotava introduced three Cavendish bananas that he acquired from Sir Thomas Buchan-Hepburn who, in turn, had previously acquired them from the Duke of Devonshire. By 1887 the curious journey of the Cavendish Banana turned full circle when Edward Fyffe, while in the Canary Islands, noticed an import opportunity. Bananas there - unlike in London - were now plentiful and cheap. Establishing an import agency, he persuaded growers to use his services on commission, shipping the bananas to the London docks where he sold them through Covent Garden Market to greengrocers and barrow-boys. The Fyffe business grew rapidly and the humble Cavendish banana transformed the Canary Islands economy.

Until the 1950's the predominant commercial banana grown was the Gros Michel (also an AAA Group triploid cultivar of the wild banana Musa acuminata) but as it was susceptible to a strain of Fusarium Wilt (Panama Disease) it was replaced by the Cavendish which now accounts for 47% of the bananas grown worldwide. Now a new strain of Fusarium Wilt (TR4) is threatening the Cavendish and its global spread will be catastrophic for this historic cultivar. 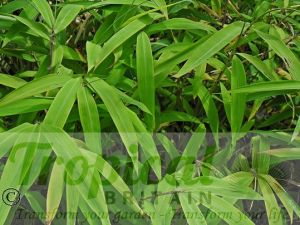 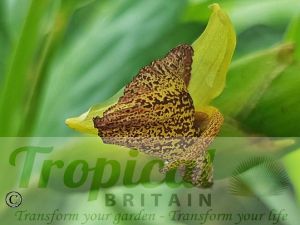 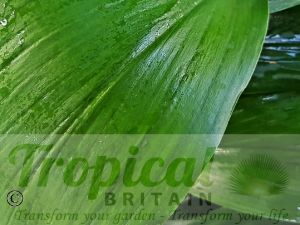 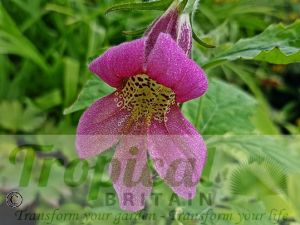 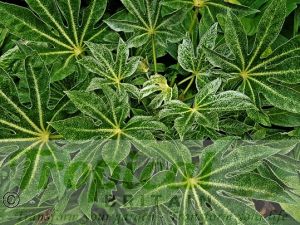 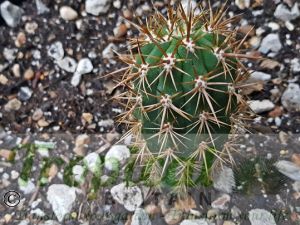 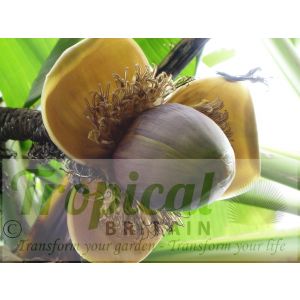